I grew up in a big family... my family was and is a ministry family which has its downside when it comes to “people.” People automatically think they know you if they know your family, people automatically assume they know who you are personally even if they haven’t gotten close to you because they know your family. We are millennials, growing up as 80’s/90’s kids on the cusp of technology and life shortly before social media. We are the last generation to remember life before social media, email and the big wave of Internet life. Most of us grew up with parents who taught us that a part of “good manners” is maintaining a calm, cool demeanor in a public setting, the "what happens in this house stays in this house" rule was ingrained in them and they may have tried to instill in us.
Flash forward to our era of blogging, vlogging, being transparent and the need to be relatable to one another. We are known as the “cancel culture” the eliminators of toxic logic and thinking! We call out those who feel the need to come at us in various ways and instead of keeping our cool most days we CLAP BACK. We aren’t like those before us and rarely use Michelle Obama’s slogan,” When they go low, we go high.” We’ve tried the high road and in the middle of a Trump presidency we have reached a point where we are tired of being “bigger” we are tired of being mistreated verbally by not only online bullies but the powers that be who think that becoming elderly or simply being a couple decades older automatically gains one respect. Respect is earned and no we aren’t just walking around being savages but we are assessing and correcting wrong doings. We are addressing and correcting things people may have gotten away with doing or saying for years. We are not a generation of passivity and yes our parents did teach us manners (we use them) and we also stand up for ourselves.
I recently saw a meme that had an elderly man on the front and stated how sensitive our generation is... the clap-back or rebuttal was, “You’d lose your mind if someone used the same toilet as you.” It was funny but also showed some hypocrisy. We are referred to as snowflakes by the right wing conservatives which I find laughable considering many of them were on the opposite side of civil rights, cheering for Jim Crow and segregation, alienating and even killing people who did not look or think like them. I got to thinking that many are still living and lead very hypocritical lives. If we are too sensitive then what does that make them? The word insensitive came to mind because many weren’t thinking about inclusiveness at ALL! They didn’t want to be integrated with people of color. Now flash forward 40 plus years and we are not just dealing with race but integration and acceptance of sexual preferences, gender transformations and the inclusiveness of us all receiving equal treatment! I’ve gotten a little off topic but not really. If there is one thing that “open minded” millennials know is that that acceptance matters, growing up it wasn’t a big deal once I got to middle school if someone was gay, I started middle school in the fall of 1999 and was a teenager in the beginning of the millennial years so we were being taught inclusiveness from a young age. This is a perfect example of how hate is taught just as love is and we see this world so much differently.
The generation before us taught us (most of us) to be loving, not to necessarily be accepting of people but to tolerate people. Especially if you grew up in any type of religious setting then you were most likely taught to tolerate what the good book “teaches” you to be against so to speak. You don’t have to accept them or their “lifestyle” but tolerate them. I’m going to get a lot of flack but I’m HERE now soooo... that’s not what we are teaching in THIS generation. We’ve learned that everyone needs acceptance, that everyone needs love and not to just simply be tolerated! They meant well, they didn’t know better and they thought that by teaching us to “tolerate” people they were doing a good thing!

The differences between us and Boomers are very clear, very loud and very much vocalized daily from Facebook, to Twitter, to Instagram and Snapchat. If your grandparents or parents were born before 1946 they’re apart of what is labeled The Silent Generation, born in a time of war, the depression and most likely poverty. You’ll notice the generation that is my grandmothers usually is very humble, quiet except when they feel the need to tell you about yourself or have something of importance to say which I admire and have taken on some of those qualities. Most of our parents are Boomers or Generation X which I just call junior Boomers born after 64 and before 81 right before us. (Generation X) I’ve found myself wrestling with them over hot button issues/topics via social media and sometimes life because at times I feel that the “X’ers” are not WITH “us” but trying to find common ground amongst the two. And that’s to be understood in a way... I find myself feeling lost communicating with Generation Z who were born after 97 when I was already a decade old. There are very fine lines and differences even amongst millennials we have a very large gap space of 16 years between the oldest and youngest millennial! There’s a whole technology gap, mindset between myself and even those 5 or 10 years older so imagine our butting heads with the “Boomers” who raised us! I have ranted on this post and I have to stop here but not for good! I want us millennials and Boomers to start up some convo on our differences, on our oneness and learning how to calmly come to an understanding. Can we do that? I hope so and I’ll be back very soon!- ❤️Cdj❤️ 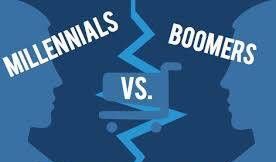