Remembering the Height from Which I've Fallen

Remembering the Height from Which I’ve Fallen
Rheaunna McDonald

Growing up, church was always a vital part of my life. We all have praying grandmothers that wouldn’t have it any other way and if they were the ones helping to raise us we were in the church house three times a week. I grew up in a traditional, Pentecostal church. That place laid the foundation for my faith in God. I experienced fire like rivals and eloquent speakers. I witnessed with my own eyes the healings of God taking place just by the laying of hands. The older women taught us to live and dress modestly. There were doctrines and traditions that were seen in the church sometimes trumped the Holy Bible. There were also misconstrued teachings that led you to believe that only one denomination would make it beyond the gates of heaven. But there was always a pull… a void in my spirit. There had to be more to my God than the church house and the traditional viewings of church.

My sophomore year of high school was a turning point in my faith. I wanted to know God and remove Him from the box that my traditional upbringing had placed him in. I began attending a church whose main goal was to make sure that YOU were loved just as you are and inspired you to change. My pastor made time for me and counseled with me whenever I needed him. The teachings brought conviction and growth to my spiritual life. The services were spirit led. I always walked away feeling confident in the young woman of God that I was becoming. This was a constant thing for the next two years of my life until I began to face a deep depression I could not pull myself out of. There was nothing that triggered my depression. I woke up one day and I could not shake the sadness. It seemed as if no matter how much I prayed, how many nights I cried out to God nothing seemed to help. I remember going to different church leaders and feeling judged and labeled because I was told to pray and I was being prayed for but nothing changed. I was told by one that it was all in my head. I felt defeated because I went from being this praise and worship leader that spoke at a few youth conferences encouraging my peers to look to God for all their problems and solutions. Because of how depression is viewed in the church community, I felt like a hypocrite. After while, I began to step back from the ministry. The depression was too much to handle and I needed outside counseling.

I found out that I had clinical depression and continued counseling. During the midst of those sessions I had felt resentment towards God and towards those leaders I reached out to. I wound up retaliating and straying more from my faith. I got pregnant at the age of 18 as a result from poor decision making from the hurt I was experiencing. I tried to get back into the church routine because I knew that God had to be the center of my motherhood. But when I went back, I was looked at funny. Had a minister point to my growing stomach and shake his head in disgust. There were a few that told my 18-year-old self, “God still loves you and He can still use you.” “Children are a blessing from God no matter the circumstance, God can use the child, too.” The encouragement I needed was nowhere to be found.

I continued to seek God in my private time and isolated myself from others. God began to deal with me and I mean DEAL with me. He showed me that He had never left my side. He showed me that His love is unconditional and His compassion is endless. I saw that my “faith” was based on what I was taught growing up and the doctrines instilled in me. God also kept repeating, “Remember the height from which you have fallen,” which caused me to break down in tears. I was humbled and somewhat honored to know that my experience with depression and me being a mother so young was something He could get the glory out of. I was reminded that things like this happens in churches so often but it is never discussed because mental illnesses and mistakes outside of God’s will are viewed as shameful and ugly to even discuss. My heart began to heal from the resentment over time and I begin to minister beyond the church walls. This is not to say that churches are ineffective, they’re not. The bible says it is good for brothers and sisters to dwell together in unity. But it is to say that even though you’re choosing to walk in the spirit and still battle with aspects of your flesh as being a result of living in this world, do not count yourself out. Do not allow anyone to shame you for your personal experiences in life. That thorn in your flesh that God is refusing to remove is remind you that HIS grace is sufficient for you.

I’ll end with this:

“Don’t you know that He who pursues and explores the human heart intimately knows the Spirit’s mind because He pleads to God for His saints to align their lives with the will of God?  We are confident that God is able to orchestrate everything to work toward something good and beautiful when we love Him and accept His invitation to live according to His plan. From the distant past, His eternal love reached into the future. You see, He knew those who would be His one day, and He chose them beforehand to be conformed to the image of His Son so that Jesus would be the firstborn of a new family of believers, all brothers and sisters. As for those He chose beforehand, He called them to a different destiny so that they would experience what it means to be made right with God and share in His glory.” –Romans 8:27-30 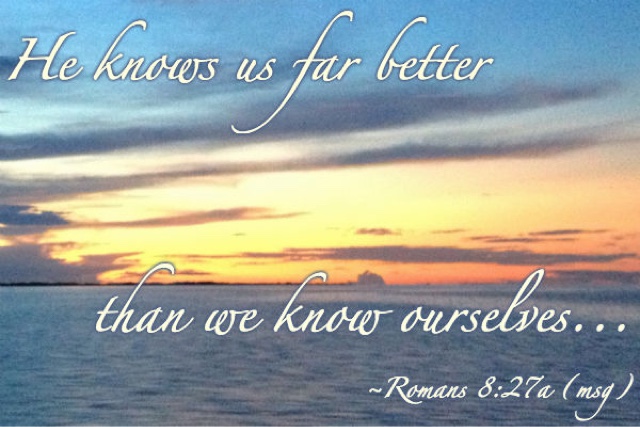