"There is a time for everything, and a season for every activity under the heavens."-Ecclesiastes 3:1

If you've followed me for awhile you'll notice that I write a lot about timing, purpose and my journey. I am coming up on my blog's 3rd anniversary and so much has changed since I began. When I started I had not started on my first book, I was working full time in an office, had moved to a new city the year prior to and it was just a lot of newness at that point. When I moved to Indy the plan was to never come back to my hometown to live... EVER. The plan at that time was to move to Atlanta the following year, I was a part of a purity ministry and a lot of my new friends were either moving there or already a part of the church there. I attended conferences in Atlanta in the summer and I liked the idea of being surrounded by like minded individuals and peers permanently.  The idea for my first book actually came to me during prayer at one of those conferences in 2014 and I started this blog a month later.

It took some time to realize that Atlanta wasn't for me and that wasn't where God wanted me, when he put Charlotte on my heart my first thought was that I didn't know many people there. I realize now that God can't always use me in comfortable situations where I'm surrounded by my familiar circle. The ministry I was a part of in Atl had become familiar, it felt safe and if it is one thing I have learned it is that when I get comfortable I become complacent, I don't grow or venture out either. So I prayed, fasted and the lord was really pressing on my heart about serving at Elevation in Charlotte. I attended a community based church in Indy during the last couple of years while living there. I thought that 2016 was one of the roughest years I had ever faced (if you have been keeping up with my blogs this year, you and I both know that it wasn't) and job loss after job loss, disappointment after disappointment sent me into a deep depression. I stopped attending  church altogether and there were days where the last thing I wanted to hear was preaching or anything God related. My daily study time, worship routine stopped and I was angry with God.

The idea of Charlotte started coming to my mind around the beginning of last year, I started working downtown Indy temporarily, started saving my money, researching jobs and places to live. If you've read the post prior to this then you are aware of the chaos that occured last year and how I even went to Charlotte in December with my mom to look at apartments and visit the church I planned on attending. January rolled around and here I was again jobless, packing my things to move back home and I was angry. I started to come around slowly around February then my grandparents house flooded (if you have kept up these past couple years, you know flooding wreaked havoc in my first apartment in Indy) then Papa got sick, for months we watched him slip away. Then he passed... everything was just coming to a head and because I have always battled with depression I know my triggers, normally I check out. I blank out, go into my shell when life gets hard but this time I couldn't, it was so much going on. I keep asking God how did I even remain steady or calm for the majority of those days. There were tears and dark days but somehow I (the emotional rollercoaster) managed to not check out.
Now that things have quieted and slowed down I am finding myself trying to adjust and figure out the next step. My pastor (online pastor for now) preached a message this past Sunday called "It Had To Happen" and he preached about Paul and Malta (Youtube "It Had to Happen- Steven Furtick). He talked about how we often end up in places where we need to be in order to get to the place where God needs us. Timing is everything and sometimes it's just not the time. A few things that he taught on stuck with me:

1. It had to happen!
2. Sometimes it's NOT the devil, it's a decision.
3. ANY boat that I am on is BETTER because I'm on it.
4. When life tries to defeat you and things get hard, let it know that YOU BITE BACK! 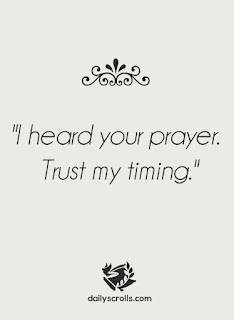